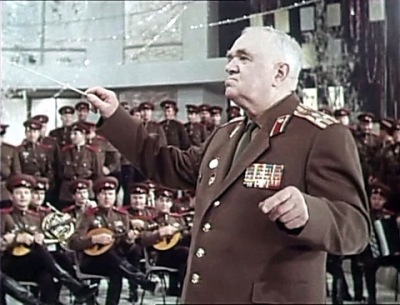 The ensemble consists of a male choir, an orchestra, and a dance ensemble. The songs they perform range from Russian folk tunes to church hymns, operatic arias and popular music; examples include The Volga Boatmen’s Song, Katyusha, Kalinka, Kernina and Ave Maria. After the Soviet period, the ensemble has continued performing, entertaining audiences both inside and outside Russia.

The ensemble was formed out of the Frunze Red Army Central House in 1928, after Marshall Voroshilov, Minister of Defence, asked A.V. Alexandrov to create a military choir. There is also a story that Stalin then asked Alexandrov to relocate the choir to Moscow. Under the name Red Army Song Ensemble of the M. V. Frunze Red Army Central House or the “Red Army Choir”, twelve soldier-performers – a vocal octet, a bayan player, 2 dancers, and a reciter – officially performed for the first time on October 12, 1928 under the direction of their conductor, Alexandr Alexandrov, a young music professor at the Moscow Conservatory. The program, entitled The 22nd Krasnodar Division in Song, consisted mainly of short musical scenes of military life, including Songs of the First Cavalry Army, The Special Far-Eastern Army, and Song about Magnitostroi.

In 1929, the ensemble visited the far eastern lands of the Soviet Union, entertaining the troops working on the Far Eastern railway.

With the goal of developing amateur art within the ranks of the army and to encourage soldiers’ interest in good music, the ensemble grew to 300 performers by 1933, comprising three different forces of a male choir, an orchestra, and an ensemble of dancers. The Red Army Choir became known as a propagator of Soviet songs, performing original compositions by composers such as Vasily Solovyov-Sedoy, Anatoli Novikov, Matvey Blanter and Boris Mokrousov.

In 1935, the choir was bestowed the Order of the Red Banner and was renamed the Red Army Red-Bannered Song and Dance Ensemble of the USSR.

Having traveled widely throughout the Soviet Union, from the Arctic north to the sands of Tajikistan, the choir performed at the International Exposition dedicated to Art and Technology in Modern Life held in 1937 in Paris, France; it won the Grand Prix, the highest honor bestowed by the jury.

During World War II, the ensemble gave over 1500 performances at both Soviet fronts, entertaining troops about to go into battle, at gun emplacements, airfields, and in hospitals.

Following the death of Alexander Alexandrov, the Ensemble was taken over by his son, Boris Alexandrovich Alexandrov. Under his leadership, the Ensemble gained fame outside the Soviet Union, making extensive tours worldwide. Boris Alexandrov retired in 1987, and was succeeded by People’s Artist of Russia Igor Agafonnikov the same year, with Anatoly Maltsev as the ensemble chief. He retired as the principal conductor in 1994; he died that year and was buried in Moscow at the Novodevichy Cemetery. He was succeeded by Victor Fedorov, the chorus master since 1986.

Under B.A. Alexandrov, the Ensemble was highly disciplined. Boris’s party trick was to leave the stage and allow the Ensemble to perform “En Route” alone. Members were positioned so that they could not all watch one orchestral leader, and this appeared to be a trick, but there was no trick at all. Leonid Mikhailovich Kharitonov remembers:

“The Ensemble members were so disciplined and experienced that they could feel the rhythm simultaneously and could sing and play together automatically, without the conductor… In Canada during one concert Alexandrov left the Ensemble to perform alone for half an hour.”

The choir consists mainly of vocal sections of tenor, baritone, and bass. In some of the pieces they perform, these sections are divided into as many as eight different vocal lines. From the early 1950s until at least 1965 a typical full division (which varied from song to song) was as follows: countertenors; first tenors; second tenors; baritones; first bass; second bass; basso profundos.

The orchestra, in what became a typical composition for later generations of military ensembles in the Soviet Union, has a mixed composition of Russian traditional instruments and western instruments, including the balalaika, the domra, the bayan, the double bass, woodwinds, brass, and percussion instruments. A great guest balalaika player was Boris Stepanovich Feoktistov (Борис Степанович Феоктистов) (1910-1988). In the West his most famous recording is Kamarinskaya (1963). A. Molostov is the trumpet soloist in Dark Eyes in vintage recordings. The bayan-player Victor Gridin is a past member of the orchestra.